“If any body who suffered the demise of Rwot Lugai then the first family.”

He put his arms around you, and lifted you to rest

God garden must be beautiful,

He knew that you were suffering

He knew that you were in pain

He knew that your world never end well on earth again

He saw that the road was getting rough

And the hill was hard to climb

So he closed your weary eyelids

And whispered peace be thine

It broke our hearts to loose you

But you didn’t go alone

For part of us went with you

That day God called you home

A limb has fallen from the family tree

I keep hearing the voice that says grieve not for me

Remembered the best time the laughter and the songs, the good life I leaved while I was strong.

Continuer my heritage, I am counting on you

Keep smiling and surely the sun shine through

My mind is at ease, my soul is at rest

Remerging all how I truly was blessed

Continue tradition, no matter how small

Go on with your life, doesn’t worry abut falls

I miss you all dearly, so keep your chin

Until the day comes we re-together again

Good bye our father, mentor hero encyclopedia library to mention but a few

We will miss you dearly grand pa love and peace, is what you left us with. 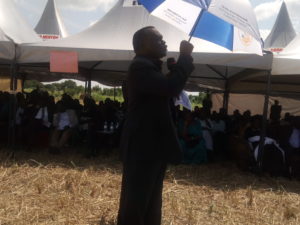 Kyadondo East Member of Parliament, Mr. Robert Sentamu Kyagulnyi, aka Bobi Wine, caused a stir when he stormed the venue where a burial service for the late Deputy Acholi Paramount Chief, the late Rwot George William Lugai with a number of supporter as mourners were cheering him and journalist turning their cameras to him thereby disrupting the speech of the Deputy Speaker, Mr. Jacob Oulanyah.

In his speech to thousands of mourners on Friday, August 2, 2019 at Pajule Town Council in Pader district, the legislator, who is also the president of People Power Movement says that it is time for the ‘old guards’ in the ruling National Resistance Movement (NRM) party to resign from politics, and advices them that there is no more time for older generation in politics.

“This is our time. The old guards should leave politics. It’s our time to takes away power because power belongs to the people. It is our power”, Bobi Wine tells mourners.

The seemingly furious Mr. Oulanyah asked the mourners why they cheering for someone who ‘gate crushed’ the funeral, Advising Bobi Wine never to step on the ‘tail of a sleeping dog’.

“Don’t step on the tail of a sleeping dog because it will bite you. Never provoke a politician in his strong areas. Leave us alone. If you want to start violence, start it from your home area. Acholi are tired of war. Please take the fight elsewhere”, Mr. Ounlyah begged his fellow legislator.

Mr. Oulanyah described the late Rwot Lugai as a ‘peace icon’, a humble chief whose leadership was not disputable, a man with of vast experience and was the Acholi bank of knowledge.

“I would describe Rwot Lugai as ‘a peace Ambassador’. His presence in 2006 during the Juba Peace Talks; and many attempts to make peace between LRA and Uganda government was remarkable. I came here not to mourn him but, I have come to give him my last respect”, says Hon. Oulanyah.

Hon Grace Kweyocwing, the State Minister for Northern Uganda Reconstruction Programs applauded the late Rwot Lugai for his loved for Acholi cultural norms, praising Acholi community for their strong support to defend their culture and for standing in unity. 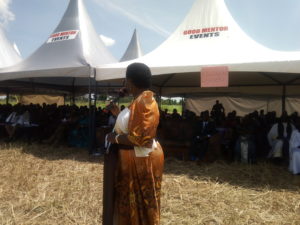 “I have come here in two capacities; as a government representative and as a mourner like you. In Alur Kingdom the name ‘Lalak hill range’ in Lamwo district was where our forefathers, Labongo and Nypir came from when the disagreement between them originated.”  Kweyocwing revealed.

Ms. Kweyocwing says other tribes look at Acholi community as being united and are proud of their cultural norms and practices although the Acholi think they are not united.

Speaking on behalf of all chiefs, Rwot Arop Paul Opobo, the chief of Pagen clan in Kitgum District challenged the Acholi community to give support to their respective chiefdoms instead of making the institution to be beggars from government and other development partners.

“The chiefdoms in Acholi which was revived in 2004 but they should not have been revived at all because of the disorganization of our people have shown. We are not being supported by our subjects. It is your work to support us. How do you expect us to operate? If you cannot support us, the blame goes back to you. Our chiefs have been left in the cold.” Rwot Arop Paul laments.

He says Acholi has lost their dictionary and the custodian of Acholi cultural heritage was Rwot Lugai. He expressed fear that the Acholi language may not survive as our youths no longer communicate in our local language but prefer foreign language.

UGANDA: THE DON’TS AND DOS IN ACHOLI CULTURE.