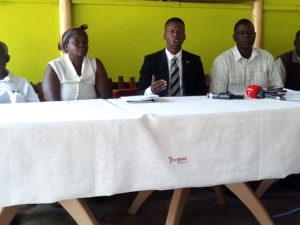 GULU-UGANDA: Even a good dancer has to leave the stage, the declaration by FRONASA fraternity in Acholi sub region on the 28th August 2019 at Gulu City to quit the National Resistance Movement party has shocked Ugandans.
“I want to take this opportunity on behalf of the FRONASA family in Acholi Sub Region to appreciate, all the media houses in their respective capacities. The former Youth M.P aspirant 2016/2021, and son to FRONASA historical the late Brigadier Lino Okuya of Awere. Francis Okello Odoki pronounced in Gulu.
Odoki has expressed disappointment saying FORNASA’s contribution to liberate Uganda has for long not been considered. Witnessing object poverty the members are confronted with while Museveni’s first family is benefiting, Odoki couldn’t hide his plan move to wave of supporting the Museveni’s governemt for whom he had been most loyal to.
“We believe that President Museveni is an accomplish of the corruption vices rocking this region, look at the Local Councilors who were slain in the early day when Uganda tyranny shot his war to power in 1986” the son of Brigadier Okuya.
He argues that as the family of the FRONASA, they recognize the contribution and sacrifices of FRONASA historical struggle for democracy, human rights, peace and security, pan Africanism and the rule of law which led to overthrow of yet another dictatorial regime.
Added that they are aware that many of these historical paid the ultimate price for their beliefs that Uganda should be free and independent, for instance, Lakwo Peter (RIP), the late Obwona Amose, the late Ferdinand Gipir, and the late Okwera Agent were executed by firing squad during the Idi Amin regime.
He further revealed that others like the late Lino Okuya was ambushed and killed while travelling from Tororo.
“We are disappointed in the current regime for destroying the historical mission of the FRONASA, in particular, from democratic to dictatorial, the failure to respect the constitution adopted in 1995 through a consultative process involving all Ugandans.” Okello Odoki narrates.
He argues that this has led to capture of the state by small clique who serve only their interest at the expense of majority of Ugandans.
Unprecedented rate of corruption and the helplessness of the President to deal with is why Odoki describes Museveni as an accomplish to grant corruption a free space in Public institutions in the country.
He accused Uganda dictator Museveni of failure to offer adequate social services in the areas of education, health, water, electricity and other infrastructures.
“Look at Awere in Odek Sub County where he Museveni claimed that this is his home village, we have the worst road infrastructure in the region, women are dying as result of poor health services, and education level remains poor. Odoki laments.
He however believes that Uganda is in the hands of few people numbered about 10,000 adding that the people can mobilize to free the country from dictatorship.
“when you leave your family to slavery, when you leave your family to dog, when you leave your family to poverty, when you leave your family of about 10,000 and that is where we are” Odoki.
Odoki further urges that the memory of hundreds of people massacred in Palaro Labwor Omor fighting liberate the country still lives in the minds of people and the orphans just like the widows left behind continue to live poverty.
Denies Kalama the grandson of former PRONASA says his father was chased away to join struggle to oust Amin, because they were wanted and when Amin was toppled, their father again was hunted by the current regime.
Ends